Mikel Arteta hailed Arsenal’s resilience as they avenged their FA Cup exit against Southampton with a 3-1 win in the Premier League rematch on Tuesday.

Arteta’s side saw their reign as FA Cup holders ended in a lacklustre 1-0 fourth round defeat at St Mary’s on Saturday.

But Arsenal made amends for that blow with a convincing success on their return to Southampton four days later.

Unfazed by Stuart Armstrong’s early strike for the hosts, Arsenal were ahead by half-time thanks to goals from Nicolas Pepe and the influential Bukayo Saka.

Alexandre Lacazette netted in the second half as Arsenal came from behind to win an away league game for the first time since Arteta took charge in December 2019.

Arsenal are up to eighth place after a fifth victory in their last six league matches, putting them in a rich vein of form ahead of Saturday’s visit from title contenders Manchester United.

After slipping towards the relegation zone in December, Arsenal are now just five points adrift of the top four.

Arteta believes that is down to his players’ mental strength.

“Winning a football game brings confidence. We were doing things right but losing games. It showed a lot of intelligence and resilience from the team,” Arteta said.

“We conceded a goal from a corner but responded straight away. We were good on the ball. We got out of trouble and made some big chances.

“Our pressing was brilliant. It was a strong performance. We have still a lot to do. We have to improve and be humble.”

On the latest impressive display from Saka, Arteta added: “He has been very consistent. He has played in different positions and adapted. He is assisting players. It was another strong performance.

“He and Emile (Smith Rowe) were both magnificent again. They need to keep going.”

Granit Xhaka’s defence-splitting pass picked out Lacazette’s run, but the French striker shot straight at Alex McCarthy with only the Saints keeper to beat.

Southampton made the most of that escape to take the lead in the third minute.

With four successive league clean sheets before their trip to St Mary’s, Arsenal had been looking unusually solid at the back, but Armstrong’s goal would have infuriated Arteta.

James Ward-Prowse curled his corner to the edge of the area, where Armstrong, left unmarked by the dozing Pepe, smashed a fierce strike past Arsenal keeper Bernd Leno.

If Pepe was the scapegoat for Southampton’s opener, then the Ivory Coast winger made amends in the eighth minute.

After Thomas Partey pressed Southampton into conceding possession, Xhaka’s pass sent Pepe racing clear and he slotted into the far corner for his sixth goal of the season.

Cedric Soares was inches away from putting Arsenal ahead against his old club with a volley that curled just wide from the edge of the area.

Saka has underlined his billing as one of Arsenal’s brightest young stars this season and the 19-year-old struck in clinical fashion in the 39th minute.

Lacazette’s pass gave Saka a chance to run behind the Southampton defence and when McCarthy rashly sprinted off his line, the Arsenal winger darted round him and rolled a composed finish into the empty net.

Saka’s fourth goal in his last six league appearances should have been cancelled out by Theo Walcott soon after the interval, but the former Arsenal winger shot straight at Leno.

It was a crucial miss as Arsenal held firm and wrapped up the points in the 73rd minute.

Cedric’s superb long pass found Saka in the Southampton area and he sent a low ball across the six-yard box for Lacazette to bundle home. 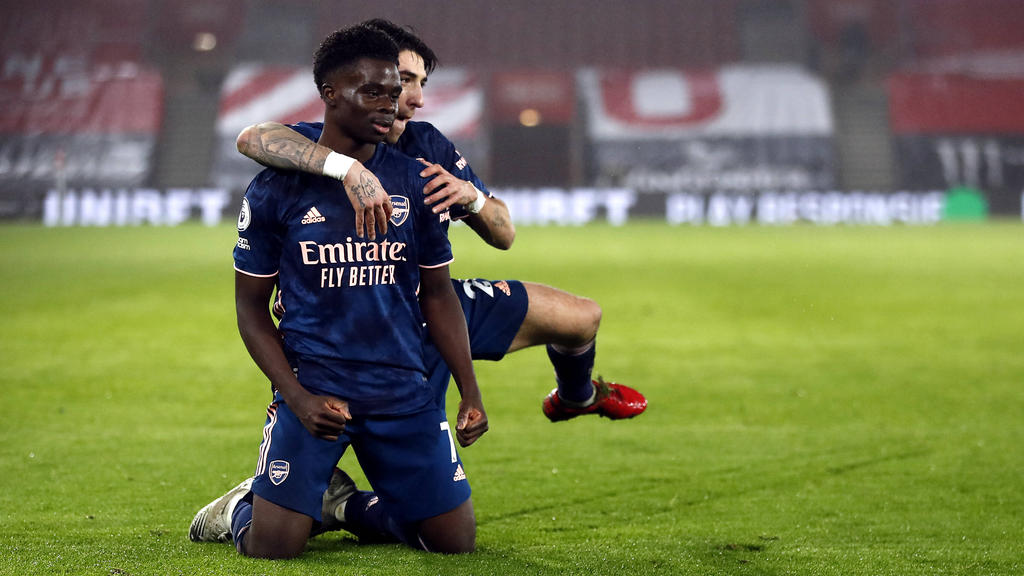